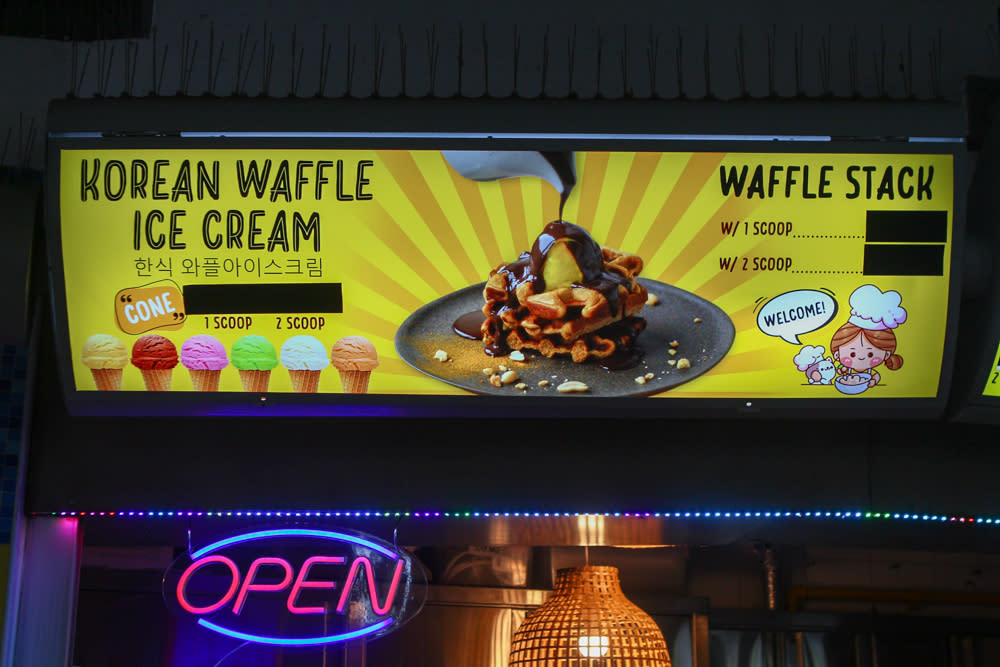 I love ice cream; even though it puts my body through hell. So, lactose intolerant or not, I left home for 127 Toa Payoh West Market & Food Centerhome to the dark Korean Waffle Ice Cream. Why obscure? Due to their lack of social media presence, of course!

I was a tad bit skeptical of the location at first. I mean, it’s strange for a relatively hip stall to not have any social media presence. But, I decided to go forth and check them out… for ice cream, that is.

If you’re unfamiliar with Toa Payoh, like me, once you reach the wet market, walk up the staircase, and follow the smell of freshly baked muffins (from their neighboring stall). Additionally, it’s hard not to miss their bright yellow signboard.

Admittedly, I was spoiled for choice once I arrived and ordered myself one of everything on the menu.

First up, croffles. For the uninitiated, croffles are a cross between a croissant and a waffle iron; it was created by an Irish pastry chef and became popular in Korea. Staying true to their name, huh. i got the Cinnamon Sugar Croffle (S$2 for one piece) and S’more Croffle (S$2.50 for one piece).

I’ve not had croffles before and didn’t know what to expect, but I found both of them to be too doughy and sweet for my liking. However, they are adorable to look at. An easy dessert to eat, they aren’t messy and are the perfect sweet treat for a child. Personally, I felt the ones at Korean Waffle Ice Cream were quite chewy, and would suggest you give it a miss if croffles aren’t your thing.

I rarely indulge in chocolate, but when I do, brownies are my go-to dessert snack. I got a slice of Brownie with Homemade French Vanilla Ice Cream. Don’t be surprised when you find a piece of paper-thin brownie on your plate, though.

Alone, the piece of the brownie was dense, chocolatey, and rather cloying. However, when paired with the homemade French vanilla ice cream, the brownie turned into a well-balanced dessert. Alas, nothing is perfect, and the ice cream was lacking that sugary-floral essence of vanilla.

Finally, the moment I was waiting for, Belgian Waffles (S$3 for one piece). To my knowledge, Korean waffles are typically large, Belgian waffles, dressed up with ice cream and a range of different toppings, then folded in half like a sandwich (similar to the ice cream sandwich that’s popular, locally). Hence, I was a tad bit disappointed to find two small pieces of waffles laid flat on a plate, topped with their homemade classic chocolate ice cream with a side of Chantilly cream, and not one that resembles the popular Korean street food.

Aesthetics aside, the waffles were freshly baked and fluffy, and reminded me of the ones from Creamier. Well done, guys. Additionally, the homemade classic chocolate ice cream wasn’t too sweet and was very light. The homemade ice cream’s a clear winner in my books, here.

But, wait, that’s not all. Apart from desserts, the stall also sells Mac & Cheese (S$9.90 with ham)! A classic favorite for children and adults alike.

the Mac & Cheese had a comforting taste to it, akin to one you can whip up at home. It was the right amount of crispy, creamy, and cheesy, just how mac & cheese should be. While it isn’t something I’d travel all the way down to Toa Payoh for, I can see how it’s a hit with many, especially kids still in their school uniforms.

I’m glad I took the time to travel to Korean Waffle Ice Cream to sink my teeth into their range of desserts. A quick chat with the owners (who are also friends) also revealed that they started out as home bakers and make their ice cream from scratch. That in itself is awe-inspiring because who has the patience to churn their own ice cream these days? I also love their café vibes in a hawker setting!

Chezcake Bistro, Joo Chiat: Quaint bistro with over 100 cheesecake flavors from S$7.50 only

The Alkaff Mansion brings Spain to you with its Cordoba Patio Festival, featuring gorgeous floral-themed dishes and cocktails